Many moons ago, a young 15 year old headed to the Prince Edward Theatre in London to see Jersey Boys with her Mother. She thought it was pretty cool but nothing super special. Years passed by and the trip became a distant memory, until 2016 when the young girl found herself in Las Vegas at the Paris Hotel with last minute tickets to see that very show again. She fell in Love with Jersey Boys that night, and the rest is history.

Surprise, it was me! Not long after I returned from Las Vegas, it was announced that Jersey Boys would soon be closing in London. I was pretty heartbroken by the news having just reignited my love for the show but I was determined to see it again before it closed. So on a cold dreary Thursday in February I braved the cold and got myself and a friend day seats for that evenings performance. It was so worth it. 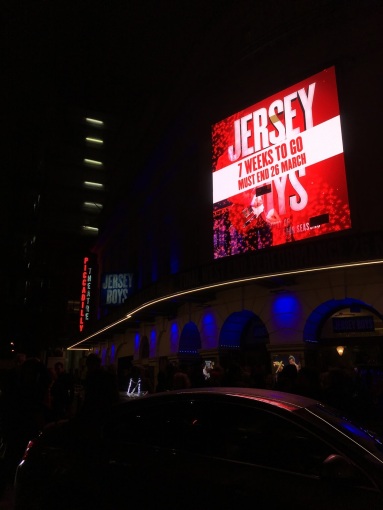 This musical tells the story of Franki Valli and the Four Seasons and their rise to fame and stardom. The story rewinds right back the bands beginnings in 1960s New Jersey and the discovery of the world famous falsetto Franki Valli. The audience is then transported through 30 years of ups and downs, hit songs and a rollercoaster of emotions. In the end, everyone is dancing in their seat. Anyone over the age of 18 is bound to recognise at least one of the chart topping songs from this world famous band which make up the soundtrack to this show. Its so hard not to sing along. Even if you don’t know the songs, you’re bound to enjoy this feel good show!

It’s too late to catch Jersey Boys at the Piccadilly Theatre but never fear because the UK Tour will start in December 2017!! If you haven’t yet seen this musical and you enjoy light hearted comedy, old school chart toppers and men in suits get your tickets now!!

Have you seen Jersey Boys or are you planning a trip? Comment down below!

All views are my own, this post has not been endorsed in any way.