Having been a long time Jodie Prenger fan (I’m talking religious ‘I’d Do Anything’ watcher) I was so excited to learn that she would be visiting the Belgrade Theatre in Coventry on her Shirley Valentine UK Tour!

2017 seems to be turning into my year of plays and I must say I am loving it!! Shirley Valentine is without a doubt one of the best so far! This award-winning comedy was written by the world renowned playwright Willy Russell in 1986 and has since been made into an oscar-nominated movie. This UK Tour marks Shirley Valentine’s 30th Anniversary and what a way to celebrate!

Shirley Bradshaw is a Liverpudlian housewife who has become stuck in the same old routine; cooking egg and chips for her demanding husband in-between talking to her good friend and confidant – the wall. She longs to be like the old Shirley – Shirley Valentine – the Shirley who went on adventures and jumped off buildings, who was confident and fun. So when her best friend offers an escape to Greece, she can hardly resist. Its not until she’s out there, that she gains a whole new perspective on life.

The story is heart-warming and hilarious and Jodie Prenger is just extraordinary. She has the entire audience captivated; hanging on her every word, in stitches after every punchline, completely enamoured by her story – and all whilst making a perfect portion of egg and chips. The instantaneous switches in character as she transformed into her snotty next door neighbour in M&S or the handsome Grecian heartthrob on holiday had me in stitches. Jodie is a joy to watch. 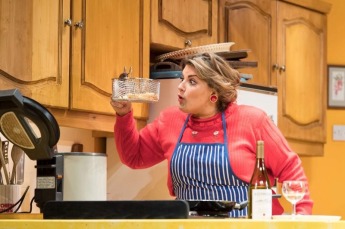 The set designed by Amy Yardley along with props by Lizzie Frankl and her team stayed true to the era and transported the audience back to the 80’s. The fact that it was fully functioning and Shirley really did cook egg and chips from scratch on that stage in that kitchen was pretty damn cool – it certainly added a wow factor.

When such incredible talent is partnered with an exquisitely written piece of theatre such as this, you could never go far wrong. This play is certainly one of Willy Russell’s greatest achievements and Jodie Prenger brings Shirley to life with her own unique brilliance. Shirley Valentine is charming, hysterical and truly heart-warming and this 30th Anniversary tour is a triumph.

Shirley Valentine will be at the Belgrade Theatre in Coventry until the 10th June before continuing on its UK Tour. For more information, head over to the Shirley Valentine UK Tour Website. Seriously, don’t miss this one.