Footloose is a classic feel good musical which many people regard as a childhood favourite. I personally have never seen the film, but I fell in love with the musical when I saw it in Birmingham a few years ago. It is currently touring the UK with a new star studded cast and I was very excited to catch it again at the Belgrade Theatre in Coventry!

For those of you who don’t know, Footloose tells the story of Ren, a city boy, moving to the small country town of Bomont. Bomont is governed by a grief-stricken rector who has placed a ban on all dancing following a tragic accident years earlier. Ren can’t stand these laws for long and after recruiting his fellow students he decides it’s time to break some rules. 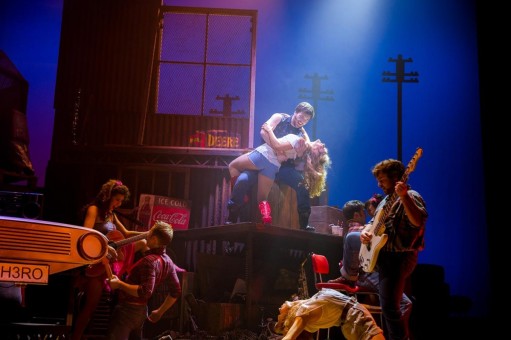 I’ll start by saying that overall I really enjoyed the production. It was fun and carefree and brought back fond memories of my previous Footloose experience, but I certainly wasn’t blown away. It was quite a small cast which doubled up as the orchestra; playing their instruments on stage. Whilst impressive, I have to say I didn’t think this added to the production. If anything, I felt it took away. I would have preferred to have performers giving 110% to their acting, singing and dancing and a separate orchestra than them be putting half their energy into playing the music.

The obvious stand out in this production was Gareth Gates. I am not usually a fan of celebrity casting but I was incredibly pleasantly surprised. It made me proud to have devoted my pop idol vote to him all those years ago! He played the role of Willard with perfect comic timing adding a number of laugh out loud moments to the show. In the one number he sang (I wish he sang more) his voice was sublime and ‘Holding out for a Hero’ provided a particular highlight.

I also thought Joshua Dowen was excellent as Ren and Hannah Price played Ariel well. The rest of the cast were good but I just felt it was lacking something. For such an upbeat show as Footloose it didn’t feel as high energy as it should have. 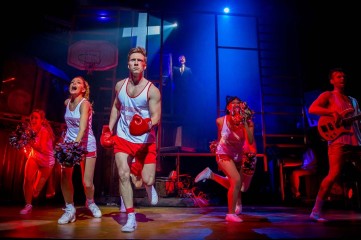 The set designed by Sara Perks was clever although felt a little cramped. It worked well to set the scene along with solid lighting and sound. The music and lyrics by Tom Snow and Dean Pitchford will always be winners. Upbeat and memorable providing the perfect addition to the story line and pre-existing infamous numbers from the film! The medley at the very end of the show was actually a real highlight for me, thoroughly enjoyable with the audience up on their feet dancing along – it definitely put a smile on everyones face as they headed home.

Overall, this is a good production of a much loved story but it won’t blow you away. If you’re looking for a fun night out with catchy songs and attractive men, you’ll enjoy it!!

For more information on the show and where to buy tickets, head over to the Footloose UK Tour Website!