On the 10th anniversary of this hugely successful musical I was transported back in time to the ever so exotic Southend-On-Sea in the early sixties. The birth of the Rock ‘n’ Roll era and the beginning of something brilliant. Dreamboats and Petticoats celebrates the smash hit albums of the same name and in doing so brings to life a feel-good, hilarious and uplifting story of coming of age. 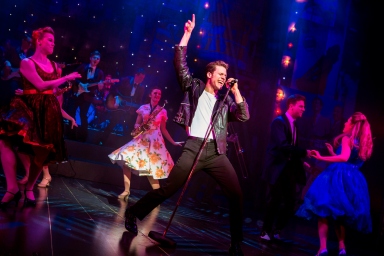 I thoroughly enjoyed my evening in the sixties, in fact I left wishing that it was my prime. It was lovely to see the older members of the audience reminiscing on the good old days and I must say they were quite tuneful when they got the chance to sing along! The songs flow seamlessly into the story and it is obvious that this show has been written with them in mind. At times it did feel that it was relentless song after song without much dialogue, but that was only a minor qualm. The jokes had me giggling throughout and the 10 minute boogie section at the end was a definite highlight, with the entire audience up out of their seats. Certainly feel-good evening.

The cast are fabulous whilst playing their instruments live on stage which works perfectly with this particular story. I was particularly impressed with Alistair Higgins and Alistair Hill; the 2 leading lads who both provided killer vocals and impressive dance moves. Elizabeth Carter and Laura Darton played their contrasting roles as the 2 leading ladies wonderfully and Jimmy Johnston gave a strong performance as the father figure. The rest of the cast were fabulous although I would have preferred a larger ensemble to increase the energy!! My favourite bits were without a doubt the acapella moments where this cast truly excelled. 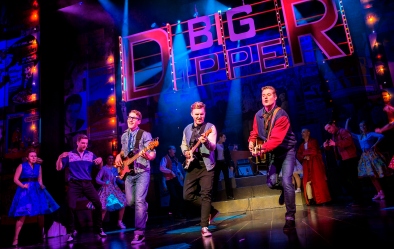 With a set covered in 60’s throwbacks and a whole host of Rock ‘n’ Roll classics to bob along to, this show really does provide a blast from the past. I can only imagine how wonderful it must be for those members of the audience with fond memories of the time. If the names Buddy Holly, Billy Fury and Roy Orbison bring back fond memories, I highly suspect that you’ll absolutely love this show. If they don’t, you’ll probably love it anyway!

This time last year ✨ #trekamerica
Added some new keys onto my key ring today 🔑🏠 #Homeowner
Sending all the birthday love in the world to my number one gal. May 27 bring you freedom, social contact and takeaway coffee ♥️💃🏼
Sorting through my laptop and came across this gem taken in El Salvador back in 2018 by the amazing @thomas_trvl 📸🌎 Amazing memories from one of the most incredible countries I’ve visited 🇸🇻💙 #ElSalvador
Happy 🌎 Day !! I sure am missing exploring it 💙
After the news of the loss of 7 of our NHS family, including 1 midwife, it feels like the right time to do this in their honour. I'm asking those who have served their community as a member of the emergency services/NHS to join the challenge of posting a picture of yourself in uniform. The goal is to flood social media with positive photos instead of negativity. Please copy the text to your timeline, put up a picture and be proud! 💙 #nhs #midwife *Thankyou Jade for letting me share this amazing moment*
My #1 ♥️
Good views, better friends 👯‍♀️☀️ . . . #Malta #Valletta #Travel
☀️☀️☀️☀️☀️☀️ . . . #Valetta #Malta #Travel
Sending all the birthday love in the world to this absolute gal @sonora.rh 🧡 I love you more than moscato.