I had absolutely no idea what to expect from Cilla the Musical and in fact declined the opportunity to see it until my good friend suggested I go. I couldn’t imagine that a musical about Cilla Black would be interesting or catchy in any way but oh how I was wrong.

The musical begins in the early 60’s, with Cilla White alone on stage dreaming of fame and fortune. From there, we embark on an inspirational journey through her early years singing on stage with local Liverpudlian bands including little known band ‘The Beatles’ right through to signing her first contract with the BBC. Cilla is thrust onto a rollercoaster of success, failure, joy and real sadness until she eventually finds her feet. There were moments I hated her, when her choices seemed completely irrational and unfair followed by moments which moved me to tears where I completely empathised with her situation. In the end I was filled with pride for a woman i’ve never met and have only ever known as the girl off Blind Date from my childhood.

Kara Lily Hayworth played Cilla and her performance was faultless. Powerful and hard-hitting vocals coupled with a feisty yet vulnerable aura made her portrayal of Cilla simply stunning. Accompanying her every step of the way was the loveable Bobby played by Carl Au who completely won the audience over. His dedication and love for Cilla throughout the story was truly believable and he displayed emotion and empathy with stunning talent. Andrew Lancel played a passionate and emotive Brian Epstein whilst Neil MacDonald and Pauline Fleming brought the comedy aspect to the show as Cilla’s devoted parents. Tom Christian was particularly memorable as Bobby’s older brother using his impressive talent to provide both comedic relief and heart wrenching raw emotion.

The overall staging was excellently done with bare brick walls providing the surroundings to interchangeable and attractive sets designed by Gary McCann. I love to see a west-end standard set in a touring production and this certainly is one of those. Nick Riching’s lighting design cleverly used both on stage and off stage lighting to perfectly set the tone of each scene. When combined with effective costuming and prop design and simple but realistic choreography the design of the show transports the audience back to the 60s in true style. 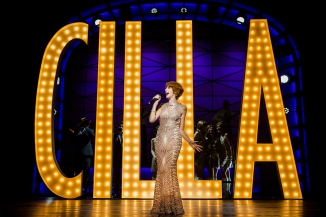 Overall I was incredibly pleasantly surprised by this new production. It combines the perfect amount of comedy gold, catchy tunes, incredible vocals and emotional turmoil to produce a winning musical. Take a tissue or two along for the second act but you’ll leave smiling. It’ll continue on its UK Tour for now but I wouldn’t be surprised to see this gorgeous production on a West End stage in the future.

Cilla the Musical is currently at Milton Keynes Theatre until Saturday 30th September before continuing on its UK Tour. I highly recommend you get yourself some tickets and enjoy this fantastic new musical when it heads your way!!