Blood Brothers is one of those ‘right of passage’ musicals. At least half the population must be loaded into a school bus and taken to see it at some point in their schooling life and for the other half there must be a production on the go 90% of the time. It’s one of the most talked about pieces around and yet this was my first time seeing it!! (I know shock horror)

Blood Brothers begins with the heartbreaking separation of a mother and her baby in 1960’s Liverpool. Mrs Johnston, a single mother with 7 young children, piles of debt and no other choice agrees to give one of her newborn twins to Mrs Lyons, the upper class lady she cleans for. The deal is that no-one with ever know. Mr Lyons wouldn’t know, the neighbours wouldn’t know, and the boys would never know. But when the 2 meet years later and become the best of friends theres only so much the two women can do to keep their boys apart. The story follows their rocky upbringing and difficult young lives until their tragic and heartbreaking end.

The storyline is immediately gripping but for me, the first act was a little lack lustre. I found that a number of scenes lacked true raw emotion and instead felt over rehearsed and wooden, which significantly weakened hard hitting and hugely emotional moments.

Having said that, the cast really excelled in the second act (other than Mrs Lyons attack on Mrs Johnstone). I finally felt something. Sean Jones who played Mickey demonstrated spectacular talent. It is almost unfathomable to imagine how in the space of 2 hours he went from boisterous schoolboy to a young man in the deepest, darkest depths of depression. It felt real. So real, that it was almost too difficult to watch and yet I couldn’t peel my eyes away from him. An absolutely phenomenal performance. 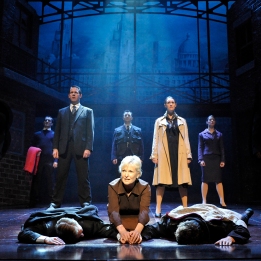 Lyn Paul was stunning as Mrs Johnstone, giving a truly heart-wrenching display of sadness and despair. The love she had for her boys felt as true as the sun in the sky and she gave Mrs Johnstone a beautiful vulnerability that made the audience simply adore her. Mark Hutchinson gave a strong performance as Eddie. He displayed innocence and naivety which perfectly contrasted his rough and ready brother. I thoroughly enjoyed Danielle Corlass in the role of Linda and I thought Dean Chisnall was commendable as the gritty, sinister Narrator.

Although I wasn’t blown away by this production, I can see why it is one of the longest running in history. Willy Russell’s legendary story telling once again captures the hearts of the audience. It’s relatable and completely captivating. Within the first 5 minutes he has you hooked and begging for more until he hits you hard, right in the gut with the ending which is just breathtaking. The entire auditorium shot out of their seats in applause, myself included, because that last half an hour blew me away.

If you’d like to catch this production, it’ll be at Milton Keynes Theatre until 7th October. If you’d like to see it elsewhere on its tour, you can click here to head to the Blood Brothers UK Tour Website!!

Thank you so much for reading!! I’d love to hear your thoughts on Blood Brothers – Leave me a comment down below or join me on Twitter and Instagram!