REVIEW | A Passage to India

This week I had the pleasure of heading to the gorgeous Royal & Derngate to see their latest Made in Northampton production; A Passage to India. Based on the novel of the same name by E. M. Forster, the story delves into the complex issues surrounding colonial India and the cultural divides which surfaced. The message is loud and clear: “One cannot be friends with the English” but when some stray from the warnings the consequences are huge. A Passage to India provides a stark reminder that 100 years on, we may not have come so far. 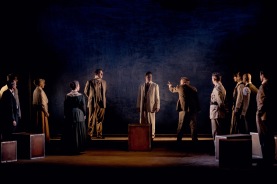 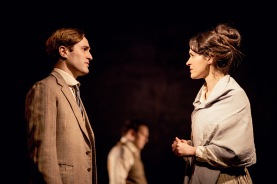 The production was simple yet beautifully formed, with wooden tea boxes and bamboo sticks providing a surprisingly versatile setting. Particularly commendable was the transformation into the ominous Marabar Caves with the voices of the surrounding cast providing the uneasy echo which haunts them. Lighting, or lack of it, further accentuated these scenes with matches casting a mysterious glow across the faces of the actors. A much welcome soundscape played beautifully by two onstage musicians provided fitting undertones. Imaginative moments such as these were numerous and completely captivating.

An excellent cast were powerful and moving in their performance. Particularly noteable was Asif Khan who played Dr Aziz with impressive conviction. He demonstrated an exceptional ability to inject both comedy and tragedy into this evocative piece. In a similar fashion Liz Crowther and Richard Goulding also provided particularly engaging performances.

I did feel that at times the production was moving at a faster pace than I could keep up with. Particularly in the first act, the story sometimes felt rushed and consequently confusing. Some themes could have been further developed to fully do justice to Forster’s complicated multi-faceted story.

This captivating adaption of A Passage to India is exceptionally imaginative, joyful and inspiring. I’d definitely recommend.