Fat Friends is a brand spanking new musical based on the popular 00’s television show of the same name. It’s a hilarious and heartwarming insight into the lives of Headingly’s weight-watching men and women. The musical broaches the worrying yet relevant issues surrounding body image and extreme dieting in a brilliantly light-hearted manner. 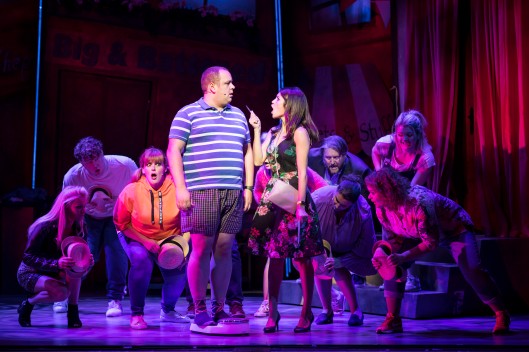 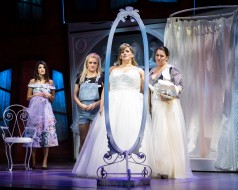 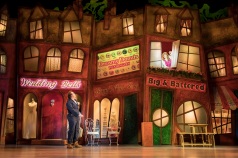 This musical comedy is fantastically funny. The entire production is incredibly personable and relatable and it really feels like you’re watching a group of best friends up on stage. I’ve said it before and I’ll say it again; nothing beats a cast that is visibly enjoying themselves – it’s infectious!

Speaking of the cast, they were exceptional. Leading the way was fan favourite Jodie Prenger as Kelly and unsurprisingly, she was fabulous. Jodie completely embodies every role she steps into and she exudes confidence. She is always a complete joy to watch. Another stand out for me was Sam Bailey. She completely won me over with her loveable and emotional portrayal of Betty and she never faltered in her acting. Joel Montague, Natalie Anderson, Neil Hurst and Rachael Wooding all gave exceptional performances and the remaining cast brought high energy and superb comedy.

The design by Bretta Gerecke set the scene beautifully and provided a multifaceted and transformative backdrop. The use of projection was used effectively to aid narration and the set had a lovely familiarity about it; transporting us all up to Northern England.

The only thing that I didn’t love about this musical was the music. Although some of the songs offered excellent comedy value, the lyrics just didn’t seem to fit particularly well with the score. I actually felt that the show would have been just as good, if not better, as a play.

Fat Friends is brilliantly relatable and exceedingly funny – It’s a laugh a minute !! You can see this fabulous new musical at Milton Keynes Theatre until Saturday 10th March before it continues on its UK Tour. Get tickets here.