Shrek is a childhood classic for those of us who grew up in the 90’s. The 2001 animated film took the world by storm with its brilliant combination of fairytale magic and comedy gold. 9 years later the story made its first appearance on a Broadway stage as Shrek the Musical and since then has appeared in London’s West-End and now in this UK Tour. I was intrigued and a little bit skeptical to see Shrek in its musical form! 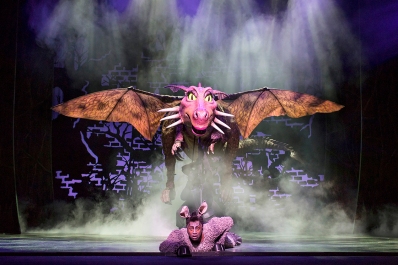 The story begins when Lord Farquaad banishes the fairytale creatures of Duloc to Shrek’s beloved swamp – much to his disdain. With the help of a rather unwelcome Donkey, he sets out on a mission to find Farquaad and demand his land back. In return, Shrek is sent on a mission to rescue the beautiful Princess Fiona from her dragon guarded tower and on their journey, they discover that the princess is hiding secrets of her own.

The design of this production by Tim Hatley is stellar. The set is constantly changing and each scene is brilliantly detailed. This combined with dazzling costumes, impressive puppetry and innovative lighting give the production a truly magical feel.

Steffan Harri was great as leading ogre Shrek; effectively portraying both his tough outer layer and his softer loving side. Laura Main was brilliantly funny as Princess Fiona, with even the smallest of facial expressions gaining huge laughs – an exceptional performance. Samuel Holmes was hilariously evil as Lord Farquaad and Marcus Ayton was excellent as Donkey. The rest of the cast was brilliantly engaging and high energy but their over the top fairytale inspired accents were very difficult to make out at times.

Overall, the show was uplifting and provided 2 hours of fun, light-hearted entertainment. There are songs abound to keep the young audience entertained and a few grow up jokes for the adults in the crowd. As a musical geek, I particularly enjoyed the musical references scattered throughout! Unfortunately though, it just didn’t quite click for me. I found the show a little slow to get get going; act 1 felt quite long and static at times and although act 2 was more exciting it just didn’t have that wow-factor. There are no particularly memorable songs and I expected a lot more comedy – particularly aimed at the children to make it more engaging for them. I wouldn’t recommend for children under 8.

Shrek the Muscial transports the audience into a fairytale world and delivers an important message about accepting who you are. It’s reminiscent and lots of fun!

You can see Shrek at Northampton’s Royal & Dearngate until 25th March before it continues on its UK Tour. For tour dates and tickets click here!