Mischief Comedy most certainly live up to their name when it comes to this play. Any prior concerns that the fun might feel forced or awkward were obliterated immediately. The Comedy about a Bank Robbery is laugh out loud tear inducing funny from start to finish. 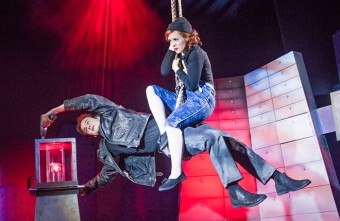 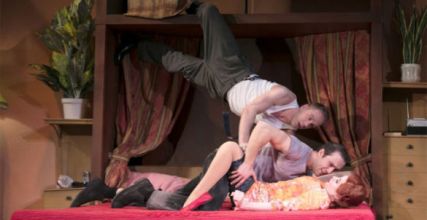 With a brilliantly clever storyline, this play is not only funny but actually quite gripping! An escapee convict is determined to get his hands on the priceless new arrival at Minneapolis City Bank and he won’t let anyone get in his way. He enlists the help of his whacky sidekick, charlatan girlfriend and a bloke they think is the maintenance man and a series of love triangles, mistaken identities, misplaced trust and outrageous twists ensue. The result? Hilarity.

Every aspect of this show married together perfectly to form a seamless piece of theatre. Particularly impressive was the staging. The set design by David Farley was stunning in general but there were a couple of real wow moments in the second act. I won’t give anything away, but the air duct scene was the most ingenious piece of set design i’ve ever seen.

The cast is absolutely spot on. Their comedic timing is pure genius and their incredible energy makes the show feel fresh and engaging. This play is incredibly high energy and each member of this phenomenal cast gave 110%. I could rave about every member of this team. Particularly exceptional were Samson Ajewole as the whacky but wonderful sidekick Cooper, Jack Whittle as Sam Monaghan, Peter McGovern as the butt of every joke Warren Slax and Chris Leask as Everybody Else – he literally plays 3 people at once and it is pure brilliance.

Pack your tissues because The Comedy about a Bank Robbery will have you weeping tears of joy. Mischief Comedy have hit the nail on the head with this completely bonkers, wonderfully joyous and absolutely hilarious play. I’ll eat my hat if anyone doesn’t enjoy this one.