Tissues at the ready, Titanic the Musical has set sail at Northampton’s Royal and Derngate. 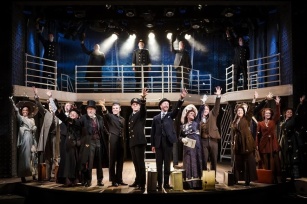 The Titanic was built to make history. It was set to be the greatest boat to sail the seas, the fastest route to America, the unsinkable ship. April 14 1912 that fateful night that history will never forget. This musical beautifully tells the tragic story of how such huge, promising dreams and a drive to be the best ultimately doomed this infamous ship.

Spectacular music and lyrics by Maury Yeston give this production incredible power. From the opening number to the final reprise, the harmonies written into the music are completely breathtaking. Although at times not perfectly gelled with the music, Yeston’s thoughtful lyrics narrate the story splendidly. This retelling intricately details each passengers story and the music illustrates their feelings incredibly well.

The simple set designed by David Woodhead doesn’t quite do the grandeur of the ship justice but works well within the piece and his costuming is exquisite. Thom Southerland’s direction is innovative in its use of the space; utilising the aisles to further engage the audience whilst adding a new and interesting dimension. This was particularly powerful during “We’ll Meet Tomorrow” which is possibly the most poignant moment in the show along with “Godspeed Titanic Reprise”.

The large cast were exceptional in their roles, with many of them demonstrating frequent costume and character changes to perfection. Each of them was incredibly strong in portraying the intricacies of their characters personalities and they all gave commendable strength and emotion to their roles. Together, their powerful vocals quite literally took my breath away. Danielle Tarento has assembled an unbeatable cast.

Titanic the Musical is a beautifully harrowing retelling of one of history’s most tragic tales. With a stunning score and a phenomenal cast, this poignant production is certainly not one to miss.

Titanic the Musical is at the Royal and Derngate Theatre in Northampton until 30th June. For info and tickets click here !

One thought on “REVIEW | Titanic the Musical – UK Tour”