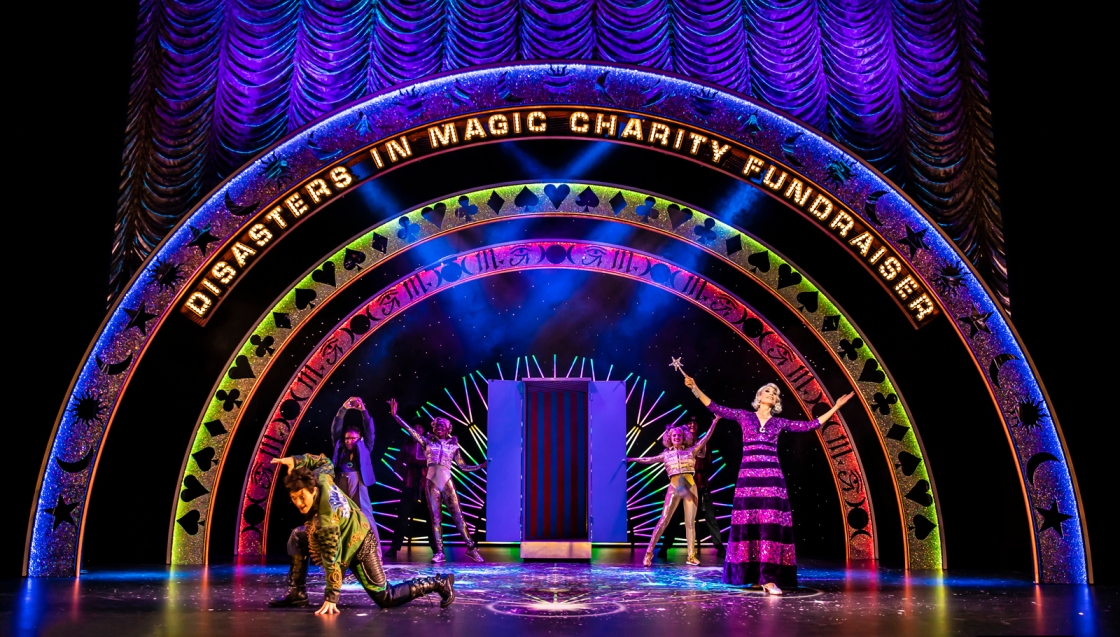 The setting for the show is the ‘Disasters in Magic Charity Fundraiser’ where a hapless gang of hopeless magicians are raising money for fellow magicians who met an untimely death. As dare-devil stunts and spellbinding mindgames spiral out of control, the fundraiser descends into mayhem with some of the cast meeting an ironically unfortunate end.

With an impressive set, you feel like you’re at a real Penn and Teller style Magic Show from the moment you arrive. Before the show even begins things start to go wrong, easing the audience in to a night full of laughter and light-hearted fun. The spectacular set in combination with faultless sound and lighting makes the staging worthy of a place on the Vegas strip, if only the show itself hadn’t been so hilariously disastrous. A vast number of spectacular set pieces are brought on and off stage throughout the show to set each act up perfectly before it inevitably goes horribly wrong. Particularly impressive was the set piece used at the end of act 1 which leaves the audience in fits of laughter, ready and raring to go for the second act.

It is always a worry of mine that a show like this might be too ‘pantomimey’ and a little awkward but this stellar cast ensures that this is definitely not the case. Sam Hill was exceptional as our MC for the evening, Sophisticato. With an impressive command of the stage Hill had the audience in the palm of his hands, landing every joke with an impressive ease whilst evoking real sympathy for his character’s plight. Other stand out performances include Rory Fairbairn who is hilarious as the questionable Mind Mangler and Daniel Anthony who impresses as Mickey, appearing in various disguises and sending roars of laughter throughout the audience every time. This is a fantastic ensemble show with every member of the small, highly skilled cast getting their moment to shine. Together, they are formidably funny.

Magic Goes Wrong is everything you expect it to be and more. It’s exactly what it says on the tin, executed exceptionally well by a remarkable cast. For a brilliantly entertaining evening that will have you laughing all the way home – look no further than this.

Magic Goes Wrong is at Milton Keynes Theatre until Saturday 23rd October before continuing on its UK Tour. For tour dates and tickets click here.